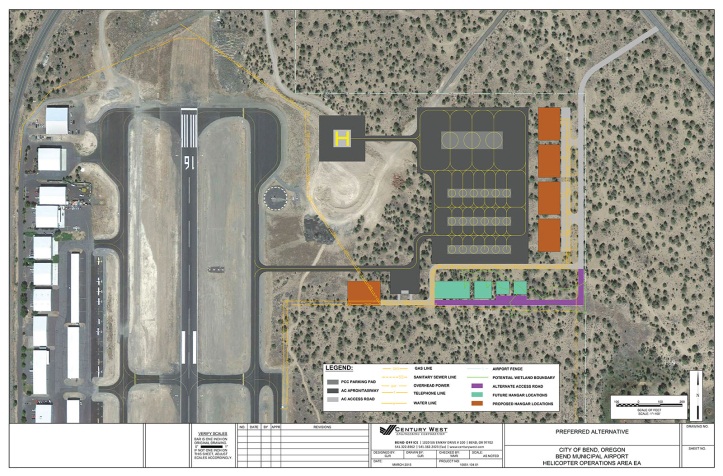 The project provides a dedicated helicopter landing area capable of simultaneous operations with the existing runway and a landing area traffic pattern that does not intersect with the traffic patterns associated with the runway. It is also intended to provide increased separation of helicopter and fixed-wing air traffic in flight and on the ground to reduce interaction between the different aircraft types and improve airfield efficiency.

West Side Parallel Taxiway A

Parallel Taxiway A was moved to the west and widened to meet the current FAA design standards.

Taxiway A was originally constructed in 1966.  After 45 years of continuous service, it had reached the end of its useful life. The reconstruction/relocation of Taxiway A will provided the minimum required separation from the runway, increasing both safety and accessibility. Link to more Taxiway A reconstruction information.

The 2010 construction of Taxiway B provided full access to the East side of the airport and safer ground operations for aircraft that now have to cross the runway to access a parallel taxiway.

The Taxiway B project was awarded an FAA grant of approximately $2.8 million and the 5% match is expected to come from a new ConnectOregon III program for assisting airports statewide. The match money will be applied for in the spring of 2010 in accordance with ConnectOregon III guidelines.

Completed in 2009, the construction of the new 5,200 ft. runway was the most extensive construction project ever undertaken at the Bend airport. Replacing a runway originally built in the 1940's, the new runway addresses the needs of existing users of the airport and offers many safety and operational enhancements.

The City received grant funding from the Federal Aviation Administration in the amount of $6.1 million for Phases II and III of the runway relocation project, which is now complete and fully operational.

In the spring of 2009 the Automated Observation Weather Station (AWOS) was relocated to the north end of the field and enhanced with a direct link to the FAA's National Airspace Data Interchange Network (NADIN) allowing pilots to obtain the Bend weather directly from Air Traffic Control (ATC) and the Flight Service Stations (FSS) while in flight and during the flight planning process. The relocation of the AWOS also allowed Aerofacilities to commence construction of the first of dozens of hangars on their leased properties. The relocation and weather link was funded from airport revenues