United States government scouts, such as John C. Fremont, and government survey teams explored Central Oregon in the 1840s and 1850s, but it was not until the 1870s that the first permanent settlement was established in the area.  By 1877 a land claim was filed for the “Farewell Bend” ranch, located at the dramatic 90 degree bend in the Deschutes River just south of what is now downtown.  A post office for the Farewell Bend settlement was applied for in 1886, and granted that year under the name of Bend.

In its earliest days, Bend was a small trade center for the agricultural and ranching operations to the east and north.  Shortly after the turn of the century, East Coast developers formed the first irrigation companies in the area, and construction was begun on several large canals and dams needed to take water out of the Deschutes River to irrigate the high, dry desert.  The main canals are still in operation today, and snake through Bend as they carry water to agricultural lands as far away as Madras, 40 miles to the north.

The City of Bend was incorporated in 1905, with a population of about 500 persons.  In the next decade, two events changed the direction of Bend for the next half century.  In 1911 the Oregon Trunk Line Railroad coming south from the Columbia River was completed to Bend.  The railroad created a new lifeline to move people and products in and out of Central Oregon.  Four years later, two large Minnesota lumber companies, the Shevlin- Hixon company and the Brooks- Scanlon company, announced plans to build large sawmills on each side of the Farewell Bend stretch of river. 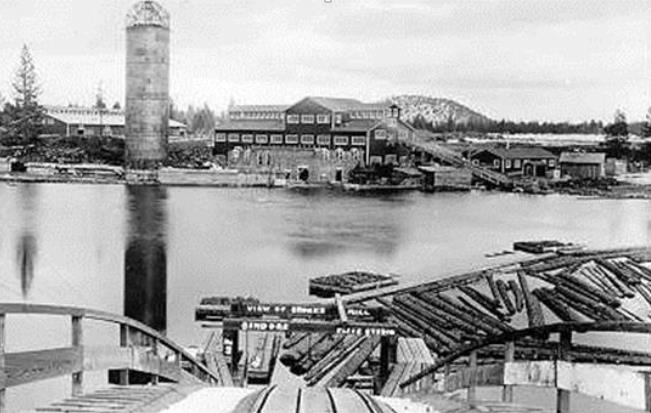 The railroad and lumber mills created an explosion in Bend’s population and increased the number of residents to more than 5,000 persons by 1920.  These same forces led to a tremendous growth in commerce and housing that is still evident today in much of downtown and older residential areas west and south of downtown.  As a result, many of the historic buildings and structures listed in the city’s inventory of historical buildings and places are direct products of the boom period of the first part of the 20th century.

The Bend area history is recorded by the Deschutes County Historical Society. This organization maintains and operates the Des Chutes Historical Center in the old Reid School building at the south end of downtown. The Historical Society assists the city and county in their efforts to assess, record and preserve historic and cultural sites within their respective jurisdictions.  For additional information, please contact the Deschutes Historical Museum at 129 NW Idaho Avenue, Bend OR 97703.