Artists Who Teach,  until March 2018
City Walls at City Hall, an arts initiative of the City of Bend Arts, Beautification and Culture Commission, is pleased to present a special exhibition featuring the works of local arts educators who teach at the middle school, high school and college levels.

Artists Who Teach includes two-dimensional multi-media works in a variety of subjects ranging from figurative to landscape to abstract, skillfully created by the following artists:

The show will remain on display through March 2018.

The Cascade Camera Club, serving Central Oregon, was established in 1947. The club is dedicated to stimulating interest in photography and improving the photographic skills of its members. Activities include educational programs and critiques of member images.

Plein Air Painters of Oregon, April -Sept. 2016
“En plein air” is a French expression meaning “in the open air”, and describes the act of painting outdoors. Plein Air artists see and embrace the landscape unvarnished, describing for the viewer the beauty before them. It is the ultimate battle of light and time. Artists immerse themselves in the elements to capture a fleeting moment in time.

Plein Air Painters of Oregon is a regional artists’ organization with its roots in Bend. Founded in 2003, it provides opportunities for artists to gather at various locations between March and November. Most sites are within an hour’s drive of Bend, however, out-of-town “paint-outs” are held at the coast, mountains and John Day Fossil Beds. Off-season, members gather for “draw-ins” at local coffee houses and pubs. Learn more here: http://pleinairpaintersoforegon.org 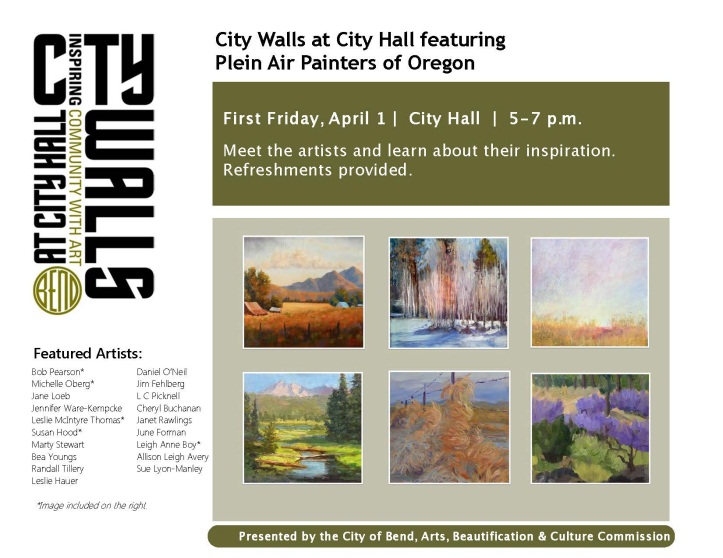 October 2015 - March 2016, As a recipient of the 2014 Arts, Beautification and Culture Commission's Annual Award, The Workhouse has proven to be a key contributor to the cultural life of Bend. The Workhouse is model for promoting the engagement between artists and the community through their inviting workshop/studio space and high quality classes. We are thrilled to include Workhouse artists in our continuing effort to shine a spotlight on local arts and craftsmen at City Hall. 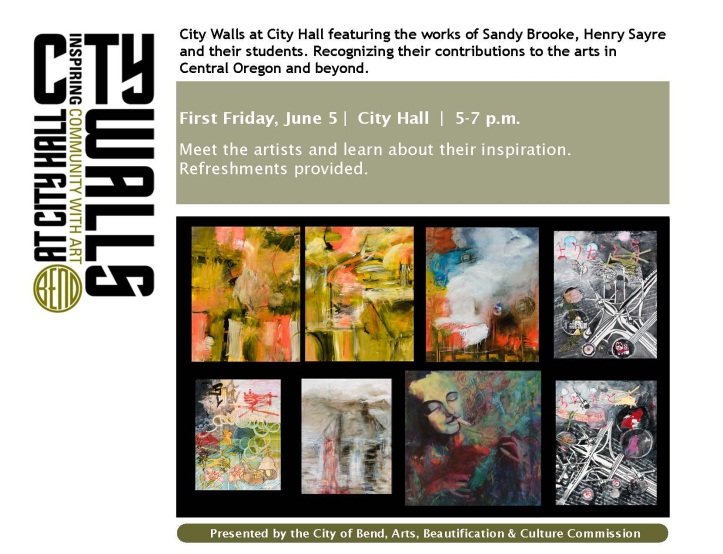 May - September 2015, a special exhibition featuring the works of Sandy Brooke, Henry Sayre and their students.

The Invitational Juried Show honors Sayre and Brooke as they retire from Oregon State University, most recently at OSU-Cascades. Their instruction in visual arts and art history has influenced many students and artists who now work in the community. Select students and alumni will also be featured in the show.

In his writing and research, Sayre focuses on the arts and their interrelations, particularly on contemporary genres such as performance and installation. Two of his textbooks, both in their sixth editions, are widely used throughout the nation: an art appreciation text, “A World of Art,” and a writing guide, “Writing about Art.”

Since 2010, Brooke has been in 16 juried shows. Three were national juried, twelve were by invitation, and one was a solo exhibition at Dakota State University. DSU purchased two works for their permanent collection. She has written three books, “Hooked on Drawing,” “Hooked on Painting,” and “Drawing as Expression.”

“This is a great opportunity for the City of Bend to showcase such rich and amazing talent. We are privileged to honor their influence contributing to the development of Bend as an arts community,” said Bend Arts Beautification and Culture Commission Member and art history alumni Nathaniel Morgan.

The show will be unveiled at a public reception on Friday, February 6 from 5 -7 p.m. at City Hall, 710 NW Wall Street.  Please join us and meet the artists at the reception. The show will remain on display through June 2015.  This is an Invitational Juried Show presented by the Bend Arts Beautification and Culture Commission.  “This is a great opportunity for the City of Bend to showcase sophisticated and modern art by professional artists in our community,” says ABC Member Shelley Hall. 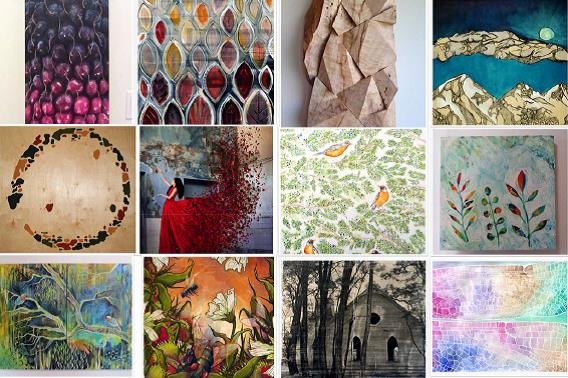 An invitational exhibition of the members of the Bend Gallery Association in honor of two decades of art in Bend Oregon. The show was unveiled at a public reception on Thursday, October 9, 2014.

The Bend Gallery Association is celebrating 20 years of existence as a visual arts organization composed of art galleries and organizations in Bend.  The BGA started in the mid-90s by Sandra Miller of Sunbird Gallery and Pamela Claflin of the Mockingbird Gallery, along with Karen Bandy with the support of Pamela Hulse Andrews of Cascade A & E. It was a way to bring patrons together every First Friday to see and appreciate art in a festive atmosphere. Thus, began our First Friday Art Walks in downtown Bend which have spread to the Old Mill District and beyond. These well-attended gatherings were started through the grassroots efforts of the art galleries and have continued to become a favorite activity in Bend.

The Cascade Camera Club, serving Central Oregon, was established in 1947. The club is dedicated to stimulating interest in photography and improving the photographic skills of its members. Activities include educational programs, exhibits of images that will be critiqued, and field trips. Visitors are always welcome at meetings.

Club members include interested novices, advanced amateurs, and photography professionals.
The club meets at the Bend Senior Center the first and third Monday evenings of each month.

The show was unveiled during Art Walk at a public reception on Friday, May 2, 2014

Local artists exhibit their distinctive, beautiful pieces that reveal their unique perspectives concerning Mirror Pond, right in our City Hall! Read the artist statements to learn about the inspiration behind each piece and how to contact the artist. 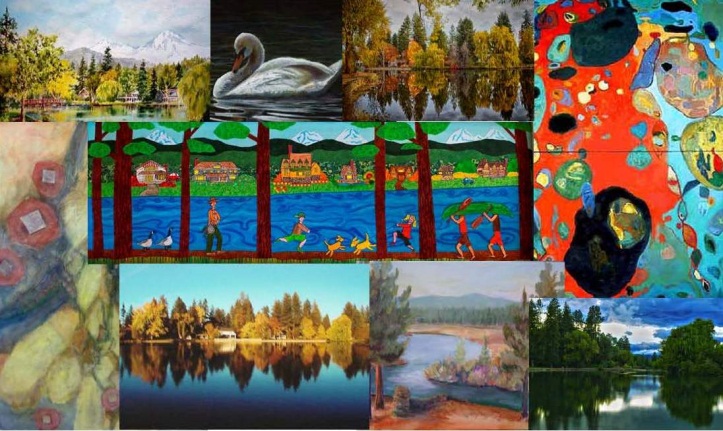 Illuminations of 'Bend 2030 Vision, Well Planned City' Through The Eyes of Our Children. 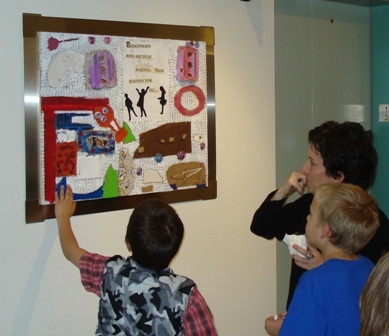 The show was unveiled at a public reception on Thursday, May 30 at City Hall, 710 NW Wall Street. The show will remain on display through Summer 2013.

"Illuminations" brings together young artists who have utilized children's foundations in our community while facing challenges in their lives such as mental/emotional trauma or physical illness. A project from Jennifer Poncia's world of art and the City of Bend Art, Beautification and Culture Commission.

Touching and imaginative, this is an interpretive collaboration focusing on the sixth Bend 2030 focus area ’Well-Planned City’. This show brings to life children’s interpretations of ten strategic themes and showcased at City Walls at City Hall.

Thank you to the Oregon Family Support Network of Central Oregon whose coordination efforts made this all possible.

Juried artists were given extraordinary photos of ordinary objects common to Bend and Central Oregon and asked to create their art inspired by the photo of the object. Annie Muske-Dukes-Driggs of Bend Research, used Scanned Electronic Microscopy (SEM) of objects such as horse hair. The nature of the photography creates an unrecognizable image of this common object. Objects too large for the electron microscope have been photographed by Joel Bailie of Bend Research, using macro-photography. Joel said, “Providing these macro photographs for City Walls has been great! As scientists, we love getting down to the fundamental level of what makes up our environment.”

ABC Commission chair, Pamela Trow-Johnson said, “There’s a strong spiritual inspiration to this show that comes from the fact that what we see doesn’t mean that’s all there is. Everyone and everything runs deep.”

The ABC Commission acts in an advisory capacity, making recommendations on the appropriate role for the City of Bend to take in supporting the arts, beautification and culture, and annually identifies the appropriate City involvement in arts, community beautification and culture with emphasis on community gatherings, events, cultural tourism and the arts. Contact Robyn Christie at 541.388.5505 or rchristie@bendoregon.gov. 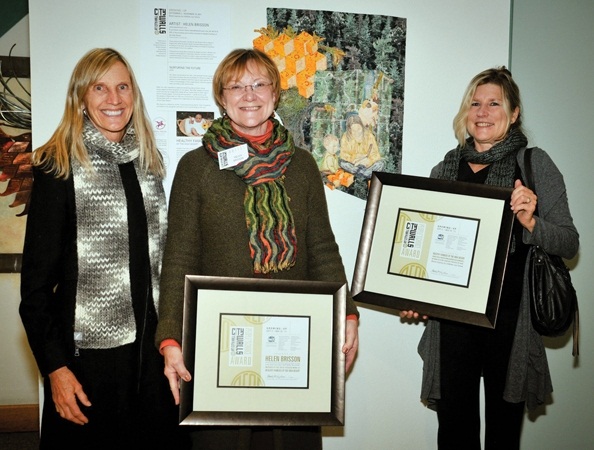