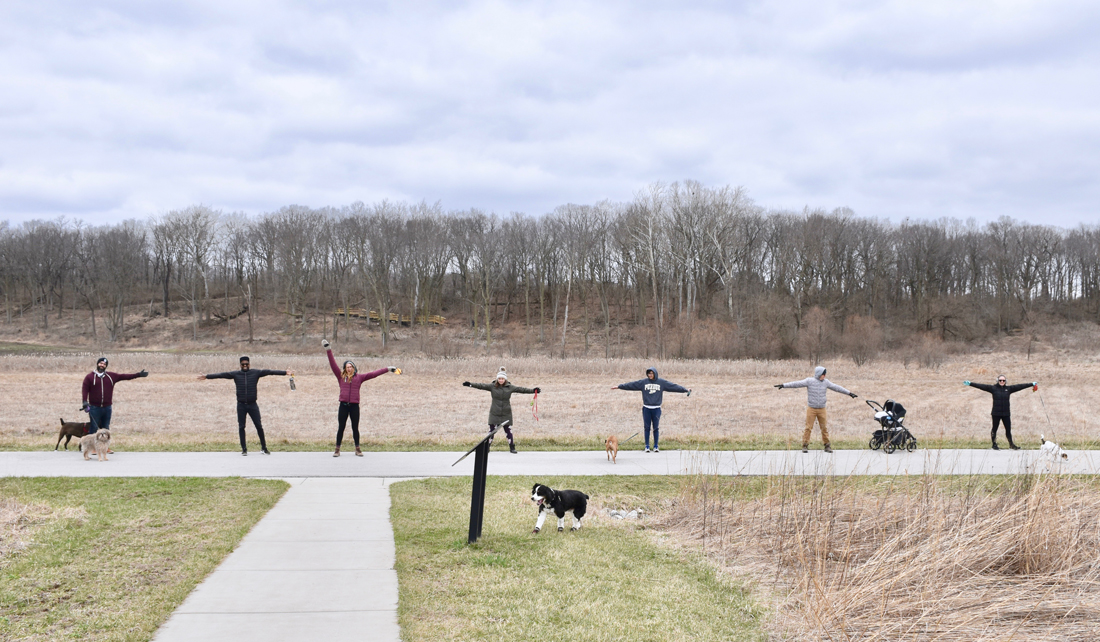 The City of Bend is creating pop-up Stay Healthy Streets (Neighborhood Greenways) to increase ways to safely get outdoors for exercise and recreation.

This pop up method allows rapid deployment of several of the City’s Stay Healthy Streets Neighborhood Greenway routes. The deployment will be supported with a map of the routes, some temporary “Road Closed to Through Traffic” signs, and the use of traffic cones to create temporary traffic calming. The goal of this effort is to increase physical distancing by increasing available recreational routes and access to trails and parks within the community.

The existing Neighborhood Greenways on NE 6th and NW 15th Streets support safe physical activity. By extending the reach of those existing routes through strategic extensions, the city can create more space for physical distancing. The expanded network of neighborhood greenways will be supported by limiting these routes to local traffic only so that people can more comfortably walk, jog and bike.

Deploying 6 miles of neighborhood greenways with temporary controls sooner than planned, rapidly connects people to more than 22 miles of trails, 13 parks and additional natural areas while also making it easier to maintain 6 feet minimum physical distance to other people:

The City will discourage drivers from using these pop-up neighborhood greenways when there are other routes they can use to access their final destination. The City asks all drivers to drive slowly and safely and expect people walking and biking along all streets. St. Charles Medical Center has limited capacity.

Roosevelt is scheduled for neighborhood greenway construction later this summer. To help people stay 6 feet apart when they walk and bike, the city is adding portable Speed 20, Pedestrian Warning and Road Closed to Thru Traffic signs now.

Centennial (south of Wilson) is scheduled for neighborhood greenway construction later this summer. To help people stay 6 feet apart when they walk and bike, the city is adding portable Speed 20, Pedestrian Warning and Road Closed to Thru Traffic signs now.

Hartford is a planned neighborhood greenway. To help people stay 6 feet apart when they walk and bike, the city is identifying this route as a low-traffic, low-speed route that can be used now to connect people to the West Bend Trail.

Milwaukee is scheduled for neighborhood greenway construction later this summer. To help people stay 6 feet apart when they walk and bike, the City is identifying this route as a low-traffic, low-speed route that can be used now.

Cumberland is scheduled for neighborhood greenway construction later this summer. To help people stay 6 feet apart when they walk and bike, the City is identifying this route as a low-traffic, low-speed route that can be used now.

Delaware is scheduled for neighborhood greenway construction later this summer. To help people stay 6 feet apart when they walk and bike, the City is identifying this route as a low-traffic, low-speed route that can be used now.

The West Bend Trail is 2.3 miles and connects between NW 17th Street along Skyliner’s Road to US Forest Service lands west of Bend.

The Coyner Trail is 1.1 miles and connects Juniper Park to Ponderosa Park.

The Parkway Trail is 0.5 miles and connects the Old Bend Neighborhood to SW Truman Avenue alongside the Parkway. Meander Truman to the Taft/Silver Lake intersection to reach the My Place Hotel trail to access the Old Mill District.

Question: Is Milwaukee still a Neighborhood Greenway and is it going to be constructed soon?

Answer: Milwaukee is a popular route for people to bike between Shevlin Park Road, COCC and downtown. Milwaukee is part of a funded Capital Investment Project along with the Cumberland to Delaware Neighborhood Greenway route. Both will be under construction soon. It has already gone out to bid for construction.

Question: Is Hartford going to move forward as a Capital Improvement Project proposal to make it a Neighborhood Greenway?

Answer: Hartford is a popular route for people to bike to the trio of schools (Miller Elementary, Pacific Crest Middle, and Summit High) located on the West Bend Trail. Because of this, Hartford is on the planned network of Neighborhood Greenways, but has not yet been approved for a Capital Investment Project for construction. Hartford, as a Stay Healthy Street, connects to the West Bend Trail and creates greater access to trails and parks. The crosswalk at NW 14th was added to accommodate existing and future biking and walking trips along Hartford.

Question: How long will the Stay Healthy Streets be in place?

Answer: The City will monitor and maintain the Stay Healthy Streets until the Governor lifts the closure orders, or until May 31, whichever comes sooner. Several of the Stay Healthy Streets are also Neighborhood Greenways or Neighborhood Street Safety Program routes that will be under construction later this summer and into the fall. These streets are Milwaukie, Cumberland, Delaware, Harmon, Roosevelt, and Centennial.

Question: How can I provide comments and suggestions for the routes?

Answer:  Please email the City at engineering@bendoregon.gov and use the subject line "Stay Healthy Streets".

The City of Bend will begin constructing temporary controls on April 21st 2020. Later this summer construction will begin on several of these neighborhood greenway routes (Milwaukee, Cumberland, Roosevelt and Centennial), as well as Delaware and Division near Crux Fermentation Project.

Opportunities for outdoor recreation and fitness have been reduced by closures of Deschutes National Forest trails, local state parks, and all school grounds (including tracks, ball fields, and playgrounds). This is causing concentration of people on remaining trails and fields which risks physical contact and close proximity. Our community is also spending time near home walking and bicycling on their streets.

The City of Bend planned a network of neighborhood greenways with the community as part of the Transportation System Plan. The City can select several segments of the planned neighborhood greenway network to create opportunities for outdoor recreation, fitness by creating routes that can support our ability to maintain 6 to 10 feet separation. Segments that extend the length of trails can increase distance between people.

The City can strategically use streets to increase access to trails and parks. We seek to reduce barriers to opportunities for physical activity and ensure safe transportation for everyone.

Vehicle trips are down.  Vehicle speeds are up. As a result of health orders, the city and region have experienced a dramatic decrease in vehicle trips. Simultaneously, community members are encouraged to maintain physical activity for associated mental and physical health benefits during this stressful time. Reduced vehicle traffic creates an opportunity for increased walking, jogging and biking in compliance with social distancing protocols and makes much more of the community accessible to routes that are low stress. Reduced vehicle traffic has also resulted in speeding on neighborhood streets, the same places where more people are walking, jogging and biking.

Physical activity needs to occur in our own neighborhoods and on public streets – everyone has access to public streets, and our streets and sidewalks have become places where people get their daily activity. As the temperatures increase we are outside more than ever.

The City Manager, as the Road Authority is restricting traffic on these streets to "Local Traffic Only" and will post signs on some, but not all, of these streets (signage will be limited as much of the city’s signing and barricade inventory is being utilized to support COVID-19 testing and other construction projects). Not all intersections or accesses will receive City-led signage; signage will be prioritized for routes with higher through traffic.

City of Bend provides signage/barricades at some locations such as intersections with arterial streets to provide notice to drivers that these streets are for "Local Traffic Only".

Post signs that promote physically distant physical activity. Residents will be encouraged to safely distance themselves from neighbors when walking, jogging and biking along these streets. Always maintain at least 6 feet of space from others.

The City of Bend is working with the Bend Park and Recreation District to promote safe outdoor recreation. Commute Options and Bend Bikes is helping with these efforts as well.

Measure the impact and modify efforts over the course of the program to continue to maintain safety.

Drivers should avoid these streets unless it is necessary to access your home, business, or under an emergency. Please review the map and locate any routes near your home. If you live on a route or plan to walk or bike along a route, see the ways you can help amplify the City’s message.